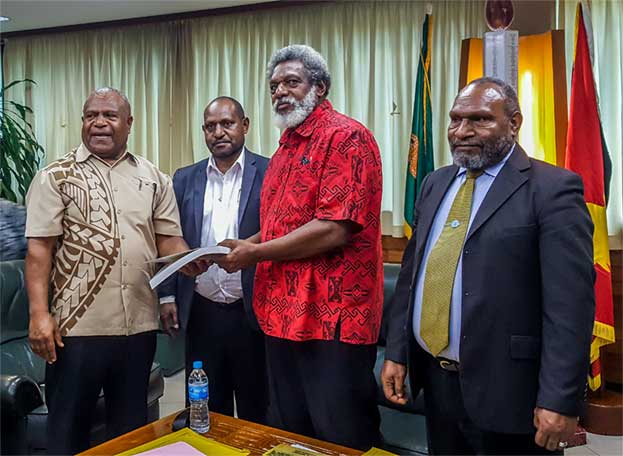 Speaker of Parliament Hon. Job Pomat receiving the UBS Report from the Commission.

I wish to clarify for public interest certain statements made by the Chief Ombudsman, which I was not aware of.

On 30 April 2019, the Ombudsman Commission delivered to the Speaker of Parliament its report on “An Investigation into the Alleged Improper Borrowing of AU$1.239 Billion Loan From the Union Bank of Switzerland, Aktiengesellschaft (Australia Branch) To Purchase 149,390,244 Shares in Oil Search Ltd and Improper Tender and Procurement of Consultants in Relation to the Borrowing”.

The Commission finalised its report after the Supreme Court in Supreme Court SC Ref No 5 of 2016 decided that the Ombudsman Commission has jurisdiction over the office of the Prime Minister.

The Report contains important findings about the legality of the process followed to secure the loan with UBS to purchase shares in Oil Search Ltd and the procurement of consultants and lawyers to facilitate this process.

The Speaker will table the report for Parliament’s consideration within 8 siting days of receiving the report and has no discretion under Section 23 of the Organic Law on the Ombudsman Commission.

The Report was done pursuant to the Commission’s powers under the Constitution and the Organic Law on the Ombudsman Commission.

This process is separate from the Leadership Code investigations.

The Commission has decided to publish this report as it considers it a matter of public interest.

All natural justice process has been complied with for persons adversely commented on.

Final Reports were also served on persons implicated after they were presented to the Speaker.